Asking For Trouble, by Sandra Byrd 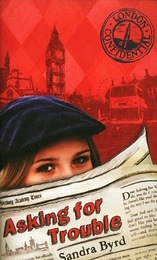 Sandra Byrd has a really nice, casual style of writing that captivates a teen audience.  As I read this book, I enjoyed all of the subtle cultural differences that were described by an American living near London, especially since I spent the first five years of my life in New Zealand, which is similar in many ways to England.  I knew right away that this book would appeal to my 12-year-old daughter, so I gave it to her to read and review.  You'll find her opinion below.

When 15-year old Savannah “Savvy” Smith moves to enters her new school in England, there isn’t any room for her. Everyone has their own “group.” There’s the newspaper staff group, the nerd group, the popular group (Savvy calls them the “Aristocats”), the drama group…the list goes on and on. There isn’t really a group for her, though, being new.

One day, she sees a flier for a position in the school newspaper. This is what she has wanted all along; however, they don’t think she’s experienced enough. She still ends up with a newspaper job, but it’s not writing by a far shot: she gets to deliver the papers.

As the book goes on, “Savvy” deals with all the normal aspects of being new and trying to fit in. She has to cope with giving up her old friend in the States, attempting to make new friends with some of the “Aristocats”, and trying to get a spot on the newspaper staff.

Along the way, Savvy gets her relationship with God back together and learns valuable life lessons. While the book may be short (261 pages), it will give you a lasting impression on how God can truly help you out in life.

Another thing I noticed while reading the book is that although Savvy “obsesses” a little bit about a boy she liked in the States, she never really attempts to get a date or make the guys in the new school like her, as is typical (quite unfortunately) for most girls in the teen years. Also, the book contains no swearing or violence.

I would recommend this book for ages 10+. (This is not because of any negative content; it’s just because I feel people around this age would fully appreciate the storyline.)

Disclosure:  Tyndale House Publishers has provided our family with a complimentary copy of this book in exchange for a book review on my blog.  No other compensation has been provided.