That's what I'd hear from my 4th grade students when I'd hand out 3-minute timed math facts drill pages to them every few days.  And some groans and lots of sighs, and rolling of the eyes, although I couldn't actually hear that.

But because learning math facts is so crucial to doing well in middle- and upper-level mathematics classes (4th grade and beyond), and my classroom had no computers back then or any other tool to use for practicing math facts, we practiced multiplication and division facts using 3-minute timed drill sheets.

Boring, I know.  Oh, did I just use that word?   When my children use that word, I start assigning chores around the house!  (Shhhh...don't tell them I said that word!)  But I didn't have any other options to use, other than flashcards, which also ranks in the "boring" category for most students.  (Please don't tell my girls that I used that word TWICE.)

After I had children of my own, and they began learning math facts at home with me, I still didn't have many options.  Flashcards?  Yes.  A little electronic tool that quizzed them with the facts.  But nothing terribly exciting for them to use which would help make a tedious task a little bit more manageable.

Kelsi understood and learned her addition and subtraction facts fairly quickly.  She understood and learned her multiplication facts after some time of working on them.  But she was very slow at multiplying, and I knew that this would hinder her for years to come if she took so much time figuring out the answers.  I downloaded a free version of an online multiplication facts game for our computer, and Kelsi loved it so much that she asked me if she could use some of her own hard-earned money to pay for half of the game if I would help her buy the full version.  We chose to do that, and it did the trick with her.

Now that Kelsi had finished with learning all of her math facts, it was time to focus on Brittany, who is two years younger.  Again, like her sister, she understood the function of the facts and how they all worked, but speed was an issue.  However, this time, it wasn't that she couldn't come up with the answer quickly.  It was her method of coming up with the answer:  skip counting.  She can actually skip count fairly quick, so that's a blessing.  But for her to come up with the answer to 6x6 without skip counting?  Well, that isn't going to happen, at least not yet.  Her brain automatically skip counts, even if she tries very hard not to skip count.  At this point in time, skip counting is automatic for her.


Here's a preview of MathRider, so you can get a taste for what it's like:

"The game is designed for any kids who have conceptually understood at least addition and are ready to rehearse math facts to get basic arithmetic down pat.  The ideal age range for MathRider is about 7 to 12, but we've had some younger and some older kids.  Particularly older kids can still benefit quite substantially.  Even adults have come to us, reporting that they now have a much easier time calculating change when shopping."

What we found to be unique about MathRider is that this game has been developed with statistical intelligence that enables the game to customize itself to each player that logs on and begins using MathRider.  In other words, if one of my children is a speed typist, and one can barely type, the game makes accommodations for each person, and the slow typist won't get penalized for not being able to type quickly.  If your child has tried other math facts computer games and has been frustrated with not being able to type the answers quickly enough, you will find that this point of frustration will be greatly reduced.  The difficulty of the math facts also adjusts to each child, and players build up rewards that accompany their level of mastery in the game.

Addition, subtraction, multiplication, and division facts are practiced while playing this game, although not necessarily all at once.  The level and type may be selected.  While this game was developed in Australia by a parent whose children were struggling to master math facts, new research from Purdue University was also used to make certain that MathRider used the best approach to learning math facts.

So...what's the game like?  My girls logged on and began playing MathRider to see what they thought of it.  Basically, the goal is to ride a horse through various quests or journeys (and "lands") while solving math problems.

There are four quests that a child can work through for each operation of math.  My girls thought that the actual practice of the math facts was fine.  They didn't mind the journeys or quests that accompanied the math practice.  They would have preferred to see more professional backgrounds and graphics in this program, especially since some of them looked like young children's drawings.  The graphics, in fact, were my girls' #1 complaint.  But keep in mind that they are both very artistic, they draw using a computer tablet fairly well, and one of my daughters has been teaching herself how to design computer graphics using PhotoShop.  I would imagine that many children wouldn't even notice the variety of "lands" and backgrounds in this game, or at least wouldn't notice it enough to be a complaint.

This is the Progress Map: 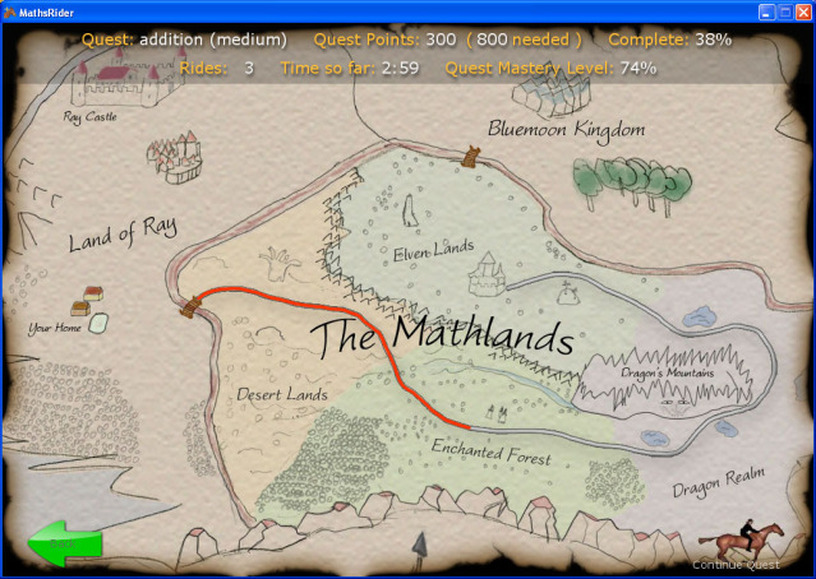 This is the Progress Map, to show the children how they are doing on their quest adventures.

Here are some screen shots
of the quests themselves: 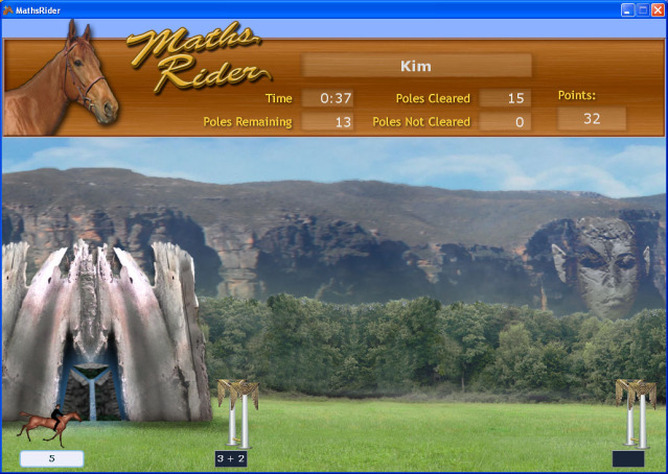 PictureThis is from the elven quest. Notice the elf faces in the two mountains or cliffs. 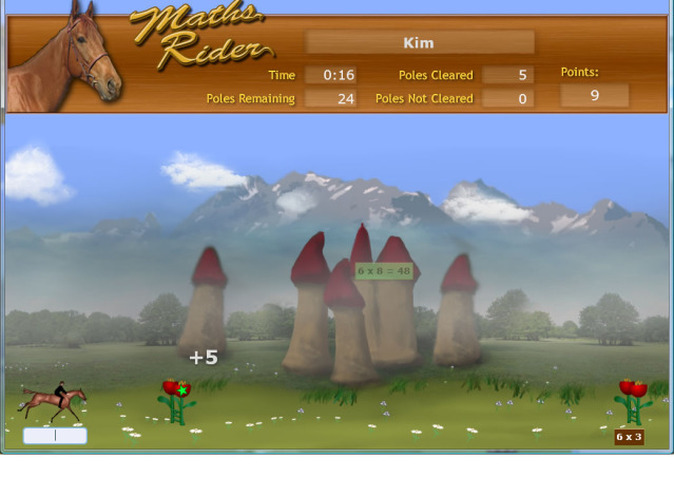 The horse and rider 'jump' over the flowers and other objects as the child types in the correct math fact answer. 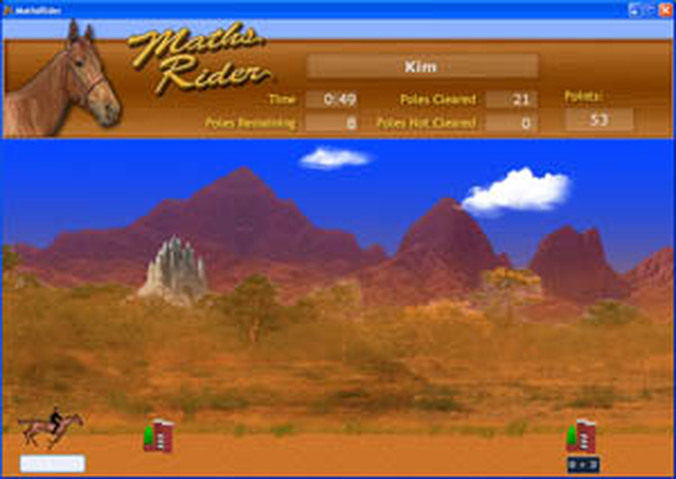 You can keep track of the mathematical progress of your child using the Statistics section. 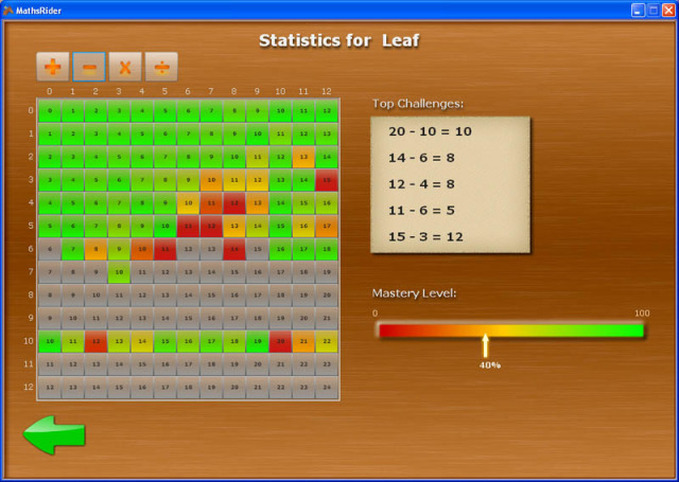 Our final conclusion about MathRider is that this is a game which has been developed to work well in most situations, with most children.  The level of graphics varies from screen to screen, and the constant horse whinny could get annoying (most likely to the adult nearby) since it is the same whinny over and over again throughout the entire game, although the sound level can be reduced, or you could choose to mute the game, if this was a problem.  While my girls still like using a different computer game to practice their multiplication facts a bit better, MathRider offers more bang for the buck since it covers all four math fact operations and also allows for ten students to sign on as users. 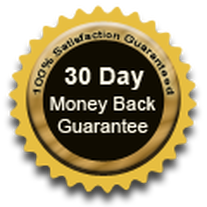 MathRider costs $37 on sale as a one-time download, and your purchase is covered by a 30-day, money-back guarantee, if you aren't convinced that it is working well for your child.

MathRider operates in Windows, Mac OSX, and Linux.  If you're interested in purchasing this software, you can buy it from MathRider's website.
Here are a few hints that some of my fellow TOS Crew members found when using MathRider:

Disclaimer:  MathRider presented me with a free trial version of their software for the exchange of an honest review here on my website.  No other compensation was provided.