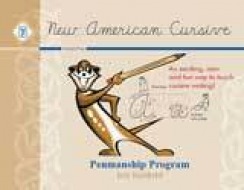 Memoria Press was so generous to send a large box to me containing a full upper elementary course in Latin, their penmanship program (New American Cursive), and a Hymns and Prayers Cursive Copybook.  I feel so blessed to be able to use these this year with my children!

I haven’t had the chance to tell you about their cursive penmanship program that they sent, so here you go!

The New American Cursive Penmanship Program was designed by Iris Hatfield, with the assistance of numerous members of the Penmanship Council of America and some handwriting teachers and specialists.

"In our current educational system, most students are not taught cursive until the second or third grade, if at all.  However, the Penmanship Council of America recommends that ‘cursive script be taught as the primary form of writing in the first grade.’  By the third grade, students’ printing habits are so fixed that it is difficult for them to learn an entirely new way of writing.  The transition time between ‘unlearning’ and ‘new learning’ frustrates and confuses many students, and they often revert back to printing."  (quote from Introduction of New American CursivePenmanship Program).
When I was teaching fourth grade in the public school system, if you had come to me and suggested that the first graders should be learning cursive instead of manuscript, I would have laughed.  Isn’t that sad?  That’s because in the 1970s, when I was in the first grade, we were taught manuscript, and I didn’t learn cursive handwriting until the third grade, which is still fairly typical these days.

However, when we began using a specific spelling/reading program with our oldest child, the author strongly urged us to consider teaching our children to write in cursive instead of manuscript.  I almost scoffed at this until I mentioned it to my parents.  They looked at me and said, "We learned cursive in first grade!"

I couldn’t believe it.  I still didn’t want to teach my daughter cursive in the first grade, but we ran into a little problem.  Well, actually, it was a big problem.

She really couldn’t print manuscript letters, even though she was beginning to read and was advancing in all other areas academically.

We decided to take the reading/spelling curriculum author’s advice and begin teaching her cursive handwriting instead.

What do you know?  Within a few weeks, she was writing very legibly.  After two months, she could write better in cursive than most 4th graders…and after six months, she could write cursive better than most adults!  I was shocked.  But the joy she had of being able to write well, legibly, and also be able to read adults’ cursive writing, was indescribable!  We were so excited for her!

I highly recommend teaching your first grader how to write in cursive handwriting.  Now, please don’t misunderstand me here…your kindergartner doesn’t need to be learning cursive handwriting right now.  Back before kindergartens were mandatory as part of elementary schools, children didn’t typically start school until they were already six to almost seven years old.  Their fine motor skills are much better suited at those ages to do cursive writing than a 5-year-old child.

Interestingly, my dad belonged to the last class in his school district which learned cursive first in the first grade.  According to his mother (my beloved grandma), from that point on, the rate of dyslexia and reading difficulties, especially amongst boys, grew by leaps and bounds.  It is too bad that no one had figured out why those with vision and tracking disorders as well as those who had a weakness for dyslexic tendencies suddenly had huge problems with reading, all of a sudden back then.

The script chosen for New American Cursive is a simplified script that is legible, fast, and attractive.  Every stroke was chosen for its clarity, speed, and ease of learning.

I like the fact that the pages are in black and white, and aren’t completely cluttered with graphics winding all over the pages.  StartWrite, a handwriting software program, can also be purchased to be used with New American Cursive to make your own copywork and handwriting pages for your family.

Here is some basic information about the StartWrite software:

The teaching guide contains excellent tips on teaching posture, pencil position, and paper position, how to teach the letters, and the "Three S’s," which are:


A cartoon character, Mr. Meerkat, gives very simple tips throughout the book to guide children to better handwriting.  This character isn’t drawn in a distractible way, which is nice.

This book is spiral bound on the left hand side, but the pages are printed in a landscape format, so that the spiral binding doesn’t get in the way of attempting to learn the handwriting techniques.  Plenty of practice space is provided on each page.

The only concern I had with using New American Cursive was that the handwriting does not start letters and words from the base line.  This may require students to decide where the middle of the line may be when they begin transferring their skills from this workbook to regular lined paper.  My children learned with a handwriting style that was also simplified, but it always (except for rare circumstances and some of the capital letters) started on the base line.  This made it extra easy for my daughters to learn how to write in cursive, because nearly everything started on the base line.

New American Cursive does not require a teacher’s guide because of its simplicity and ease of use.

For most children, this is a great choice that I recommend for learning to write in cursive.

Below is a sample from Book One of
New American Cursive:

Below is a sample from Book Two of
New American Cursive:

DISCLOSURE:  While I will never be paid to write a product review, I did accept a free copy of New American Cursive for me to use in our home and then write an unbiased review.