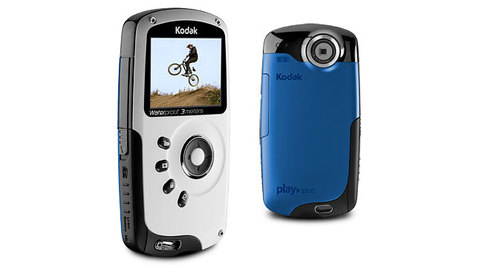 Photo by Kodak
First, I'd like to let you know up front that this product review is not because Kodak contacted me about promoting or reviewing their video camera, the Kodak PlaySport Digital Video Camera.  While I often share product reviews with you after receiving a product from a company, sometimes I just like to share my own experiences with a particular product.  This is one of those reviews...where I didn't receive any product from Kodak in order to help write this review.

My younger daughter, Brittany, has wanted to buy a video camera for a long time now, for at least a couple of years.  Since my husband and I don't normally buy the girls toys or items on their "wish list" except for a couple of things at Christmas or their birthdays (which are within six weeks of each other), the girls have always had to earn and save their own money for the joyous luxuries of life that they want.

After Brittany held several homemade cookie/lemonade stands in our neighborhood and saved other money that she had earned over a period of six months, she finally had almost enough to purchase the video camera.  Because saving money has never been her forté, we rewarded her with the extra $14 she needed for the camera after saving $100 over a long period of time.

For about a year, the video camera she has wanted to purchase has been the Flip Ultra HD.  She has used a friend's Flip camera several times in the past, and she liked its ease of use and flexibility, as well as its size.

One night, I stayed up late and researched video cameras.  I had taken information from Consumer Reports magazine from our local library as well as several other online sources.  I was a bit concerned about spending so much money on the Flip, as it had no optical image stabilization nor optical zoom.  I was leaning more toward a bigger video camera that was going to cost considerably more, around $225-$250, but seemed to have much better zooming, focusing, and image stabilization.  However, I knew that she would be very unhappy to hear that she might need to wait another year or so to continue saving enough money to purchase a video camera.

Then, I had a grand idea...and stayed up until well past midnight to do some more online research on YouTube.  YouTube?  Well, it turns out that lots of people have purchased video cameras or received them as a review product, and then have posted videos made with those video cameras on YouTube for everyone to see.  All I had to do was do a search for "Flip Ultra HD" cameras or any other video cameras I was interested in seeing their film quality.

This was very eye-opening!  I highly recommend that if you are in the market for a video camera, you choose several different video cameras you would like to learn about, and then search YouTube to view actual footage filmed on those cameras.  It was apparent after watching 8-10 Flip Ultra HD video clips for the newest October 2010 releases of video that the Flip had a lot of difficulty focusing quickly from one thing to another.  In fact, it seemed like maybe my glasses weren't working well...everything was just ever so slightly blurry all the time and not sharp and clear as I would expect HD video to be.

Of course, I realize that we are talking about video cameras which are under $150, so what can you expect?  Well, after looking at some video camera reviews on YouTube where reviewers were doing some great work placing three different small video cameras on one tripod and then comparing the various attributes of the different video cameras, I quickly made a decision on which video camera I thought Brittany should purchase:

There are several things about the Kodak PlaySport which impress me.  First, its case is not slippery for a child to hold.  It is easy to grasp and hold well.

Second, its HD picture quality is pretty amazing for a camera at this price range!  Seriously.  I am still surprised at the excellent footage it takes around the house.  We hope to venture outside with it soon!  Yes, it will be grainy in low light conditions; even some $500 video cameras experience the same problem.  We expected that.  But in medium light conditions, inside, it does well enough for our family.

Third, this digital video camera is waterproof, up to 10 feet.  While Brittany would love to submerge it into a swimming pool and take some video footage with it that way, just to say she has done it, I'm encouraging her not to do this.  However, it is great to know that if she accidentally drops it into water, or it is exposed to the rainy weather, it will still work and function, as long as every cover is firmly closed (battery case, etc.).

I did notice that the Sony Bloggie video camera (in a similar price range) had a better microphone, but it didn't focus as well, nor were its colors as true as it filmed.

One of the drawbacks of the Kodak PlaySport is that it uses ArcSoft software to download the movies to the computer, and this is more of a proprietary software.  However, I'm including some YouTube videos below which show how to convert the files to fit with Windows Movie Maker or other software, so check that out below.  A quick search of YouTube or the internet will provide you with most of what you would need to know to work with and use ArcSoft.  So far, Brittany actually thinks that it is easier to use ArcSoft's software than Windows Movie Maker, but we've only had the video camera for a couple of days now. 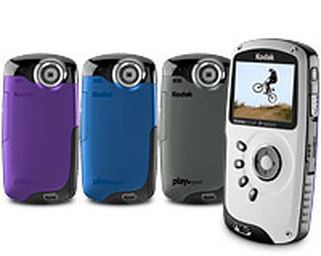 Photo by Kodak
The Kodak PlaySport comes in three colors:  purple, blue, and black.  As you can see from the photo at the top of this page, the PlaySport's viewing side is white and black, as it is on all three color choices of this camera.  If you purchase this video camera, it will come with the following in the box:

If you decide to purchase a Kodak PlaySport for you or a child,
I recommend the following accessories for your video camera:

Photo by Kodak
1.  Neck strap.  Remove the wrist strap and immediately place a neck strap onto this camera.  It is lightweight as are all of the pocket video cameras, and it can easily be dropped.  A neck strap will prevent damage from easily occurring. 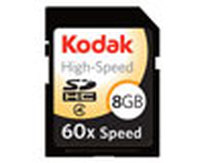 Photo by Kodak
2.  Class 6 High Speed SDHC Memory Card.  We were blessed to find that our local office products chain store had this type of memory card on sale for $24.99 last week, from a very reliable brand (not the one pictured above; we purchased the same brand, but the Class 6 "100x speed" version).  This was a steal!  Even the gal at the checkout counter couldn't believe that they rang up for $24.99!  They are usually at least $45 - $60 for a Class 6 SDHC memory card.  While you can use a Class 4 card, it is recommended that you use a Class 6.  An 8 GB card will allow longer video footage storage.  And, well, we needed two of these because my older daughter decided to use some of her saved money to buy a video camera, too! 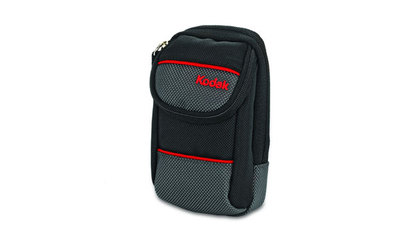 Photo by Kodak
4.  Heavy-duty video camera storage case.  We decided to wait to purchase cases for the girls' cameras until they arrived and we could try them out in stores to make certain they have the right fit.  Years ago, I was trying to be frugal with our very nice film camera (we purchased it second hand from a friend), so I bought an inexpensive $15 camera bag for the camera.  On a drive from the coast back to our home, on a winding road, the tool box shifted in the trunk and hit the camera bag.  $125 later, I had paid to have the film camera repaired as well as buy a new lens.  It was then that I learned the importance of purchasing a highly padded and reliably made case or bag for electronics and cameras.  We will be buying storage cases for the girls' video cameras this week.  I will look for the very firm padding, that has limited flexibility.  It will cost more than the average el-cheapo camera case or bag, but it will be worth it. 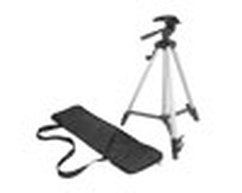 Photo by Kodak
5.  Tripod.  I can't recommend any one tripod yet, as we haven't purchased one, but you can find tripods in many stores in your local area for as little as $10.  We hope to purchase one soon. 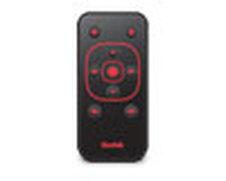 Photo by Kodak
6.  Remote.  We aren't sure if we will purchase a remote or not.  We don't really see a need for it right now, but it may be something we'll consider in the future.

Helpful videos and information about the
Kodak PlaySport:

Here's a video from YouTube user "YesItsNew" which shows us how to convert the Arcsoft MediaImpressions .MOV software to.WMV:
Here's another informative video about working with HD formats:
Here 's a video on how to first begin using the ArcSoft MediaImpressions software:
See below on how to add captions and do more cutting and pasting:
Watch below to learn how to capture images and animations using ArcSoft MediaImpressions:
See the video below about how to upgrade to MediaImpression Version 2.0.24.586 for Kodak Zi6 camera users free of charge:
View below on how to make neat video intros with Microsoft Paint:
Here's how to make frames for your video:
Would you like to know how to trim or cut a movie two or more times?  Watch below:
View below for step-by-step instructions on how to upload a video to YouTube:
You can also learn how to share full screen, 16:9 ration videos on YouTube, below:
Would you like to know how to speed up or slow down your movies?  Here's how:
Below is the fastest way to transfer video footage from your digital video camera to your computer:
Here's how to place an animated GIF into an ArcSoft movie:
Below is a music tutorial for the ArcSoft MediaImpressions software:
Here's how to get the fading audio effect:
Here's how to start new music in the middle of your movie:
Watch below to learn how to convert your movies into PowerPoint presentations:
Here's how to make a Christmas, holiday, or birthday video card:
Watch below to learn how to place a variety of frames into your videos:
Here's how to get the popular "sketch" look in your video movies:
If you ever need to cut your video in half, here's a simple demonstration:
What if you need to convert your .MOV format to .MP4?  Watch this:
Here's how to make the Fish-Eye effect:
"Project" vs. "Save & Share":
Having problems previewing your movies?  Watch below:
Want to convert your Windows Movie Maker movies into ArcSoft?
Want to add a wide angle or macro lens to your PlaySport?  See this!