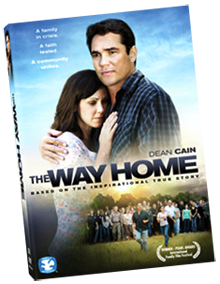 In "real life", on March 31, 2000, Randy Simpkins came home early from the office to help his wife, Christal, pack for a vacation to the beach.  Christal asked Randy to load their two year-old, Joe, into his car seat.

Instead, Randy left Joe riding his tricycle in the driveway while he went inside to turn off the lights and lock up.  They lived on a rural farm in a safe area.  Their kids played outside all the time.  Randy didn’t give it a second thought to leave Joe for a couple of minutes, figuring he’d be cooped up long enough on the drive to the beach.

When Randy returned outside, Joe was gone.  His tricycle was laying on its side, motionless.  Randy called for Joe and looked around the yard.  He was greeted with an eerie silence.  A sudden feeling of panic rushed over him like a wave.

Randy did not realize it at the time, but the next eight hours would put him through a life-altering roller coaster of emotions that would challenge his priorities regarding God, his family and community. 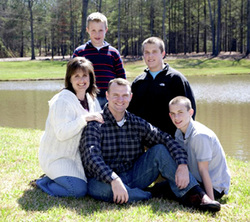 Ten years later, this has now been made into a feature-length film starring Dean Cain (Superman in Lois and Clark - The New Adventures of Superman).  Interestingly, the film was made in the same location as where the real event took place.

My family was able to enjoy watching this new DVD film a couple of weeks ago, thanks to Lionsgate Studio.

I cannot even imagine the horror and pain of having a child lost for more than a few minutes.  I pray that you and I never have to go through this kind of pain.

In our community, a 12-year-old girl was babysitting her twin nephew and niece almost exactly 10 years ago, and she ended up missing while babysitting that evening, on October 30.  She had been abducted by a man who was known by her aunt.  While the police suspected the man, they couldn't find any evidence of a crime, nor could they find her body.  It took almost ten years to find the evidence for the person they suspected of committing the crime, and he will go to trial soon.  I used to see this girl's mother almost weekly at an office supply store in our town, and it was painful to see her going through the grieving process.  I have prayed for her many times over the years.

I'm not going to give away the ending of The Way Home.  You'll have to view it for yourself.  I will tell you that we all enjoyed watching The Way Home.  The acting was professional, although we did notice that there were a few slower spots in the movie.  The Way Home is an excellent family film that has no inappropriate scenes, language, nudity, or anything else that would be objectionable.  It is the kind of movie that will promote and enhance your faith and your relationships with the members of your own family.  I would say that this film is appropriate for ages 10 and up.

Disclosure of Material Connection: I received one or more of the products or services mentioned above for free in the hope that I would mention it on my blog. Regardless, I only recommend products or services I use personally and believe will be good for my readers. I am disclosing this in accordance with the Federal Trade Commission’s 16 CFR, Part 255: “Guides Concerning the Use of Endorsements and Testimonials in Advertising.